Since reaching my target, I've barely touched the AH so this post is by way of catching up with what random bits & pieces I have been selling as I try to clear the decks a little for my next target. I guess you could say I've 'Gone Fishing' for a while but the gold fever is in my blood & to be honest, the game just doesn't feel the same without that target looming. Yes, I'm playing my alts, levelling, PvP'ing a little, doing those darn Molten Front dailies etc but it all feels rather like aimless wandering so I've decided to go for the 2 million target!

I've also stopped taking a note of my gold balance over the last few weeks so there'll be no maths in this post to work out profits! Most of what I've been selling was leftovers from when I hit goldcap or random bits I've picked up whilst playing my alts so I'm rather pleased to see 23k in sales, although that is the total for 12days not 1 week!

I did craft some Ebonsteel Belt Buckles - I have 8k Elementium Ore leftover & probably around 500 Volatile Earths so the buckles seemed a good idea as the price had risen a little since last time I looked at this market.
I also prospected maybe 2000 elementium ore to restock on some colours of rare gems - the prices were just too tempting for me not to spend a little time on it. I've had almost 2 weeks off & my husband has almost finished his Inscription researches so for this next phase of my journey, I will not be doing very much business in the Glyph market - I'll let him have that one :) 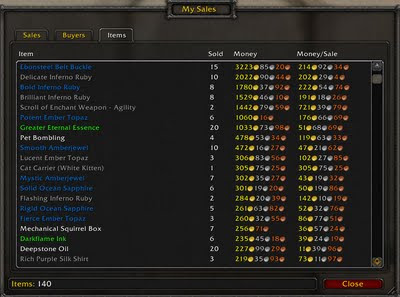 Going forward, I was trying to think of a different way of getting to 2 million but I'll definitely be using Jewelcrafting - between the rings/necks to disenchant & the cut rare gems, it's too good a profession not to use. I hope I can finally get my head around Enchanting scrolls - having dipped a toe in the water for the Patch 4.2 rush, it doesn't seem quite so intimidating now.
I also have 2 free profession slots on a lvl 71 hunter - she was my original miner/JC but she was left abandoned a long while ago & has been superseded. I don't have a high level Engineer & my current low level Engineer is not an alt I actually like (as strange as that sounds) so my hunter seems like a perfect candidate to take over there. I only have 1 Alchemist at the moment so I guess that decides her second profession too :)
I'm going to continue these weekly 'what's been selling' posts - more out of curiosity myself than for any great gold making message but seeing what I sell can spark ideas for you to take & run with so I hope you'll bear with me.
I also have my first post going live over at Goldgrub's Goblin Academy tomorrow - it's quite nerve-wracking for some reason but exciting too - so pop the date in your diary & come visit me :)
Posted by Unknown at 10:33