I received a reader email the other day asking about 'Nev's glyph strategy' after they had listened to an old PowerWord:Gold podcast & I realised that I'd never actually written a post about it! The timing is also fortuitous as there has been a fair bit of glyph talk on Twitter too so here we go - how I do glyphing - laid back, get there eventually style - my Lazy Girls Guide to Glyphing!

Some scribes like to make a few of every glyph, they have bags & bags of stock, they 'wall' prices in an attempt to control the market & to be honest, I admire their dedication & organisation skills but I just don't work that way. If you want to read more about hardcore glyphing, have a look at Twitchie's latest post 'Two Character Glyph Operation', Faids 'Glyph Competition: A Primer' or Huntermastery's 'Return of the Inscriptionist'.

I have my TSM groups set up by ink & I cherry pick the highest priced glyphs to craft & list. I suppose this is a variation on the 'Buy Low, Sell Normal' theory although I do prefer 'buy low, sell as high as possible' version :) I am also averse to hard work in a game so my method works well for the more casual gold maker.
Each morning I empty my mail, do a cancel & relist at the Auction House then do an Inscription only scan - it's very quick & gives me the information shown below in the screenshots. As you can see, someone else is raising glyph prices on my server & doing all the hard work for me. The bulk of the glyphs I craft are Ink of the Sea or Ethereal Ink ones & depending on herb availability, I may only craft glyphs above 400g or 200g if there is a good supply.

I've only recently returned to the glyph market but without spending huge amounts of gold on herbs, I am happily making 4-8k gold per day with just 2 or 3 cancel/relist sessions - each of which takes only 5-10 minutes. Ink is currently costing around 10 gold per ink so I have changed my Threshold price to 50 gold. This means that I don't have to worry too much about what price TSM wants to post a glyph. Even a sale at 50 gold is making me some profit - not much, admittedly but the time saving effect is worth the loss of a little profit. 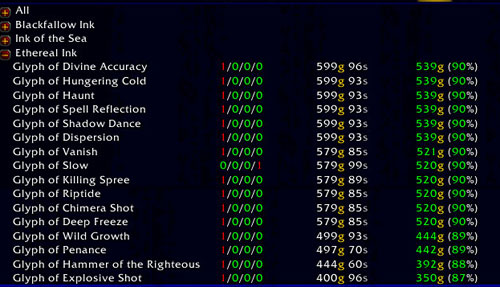 Now before you saw 'wow, look at those crazy prices' - yes, my server does seem to be a bit special when it comes to glyphs but I did a little experiment on another server using only a level 10 scribe & I still made a fair bit of gold. The trick is to control your herb costs & only buy inks or herbs when the craft cost is much less than the glyph prices. When leveling your inscription, don't make 5 of the same glyph just to get points! No, just make the glyphs that show up as profitable in TSM & watch the skill points accumulate painlessly! 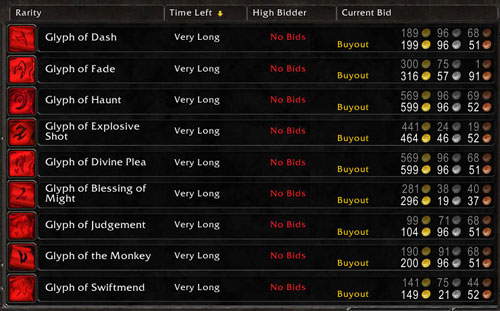 The above screenshot is a sample of my listed auctions - you can see the wide range of prices TSM has listed them for. Now I've only been crafting glyphs that TSM says are above 250 gold but as the market prices move, TSM adjusts & undercuts other listings, hence the 104 gold glyph - but that is still way above my crafting cost so I have no problem with that.

As a very extreme example - look at this screenshot! Some random scribe has listed glyphs at 1000 gold each - TSM automatically undercut him by my few silver preset & I left my auction there, even though I had zero expectation of it selling! Well, I'm happy to say - it did sell!
Posted by Unknown at 11:41