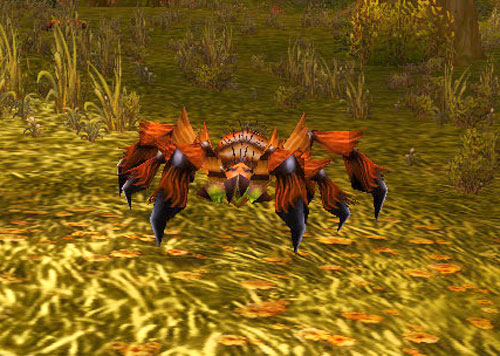 One item I always buy from the Auction House when I see it is Spider's Silk. It's always been notoriously difficult to farm but just after Cataclysm launched, it became damn near impossible to find. A bug fix by Blizzard eventually fixed the drop rate but many of the previous mobs that dropped it had either disappeared or changed levels with the overhaul of the Vanilla zones.

I received a query this week from someone who had found my old Lowbie Leatherworking post, asking where should they go to farm for Spider's Silk. So off to Wowhead I went & reading the comments, came up with 3 areas to try - Duskwood, Hillsbrad & Wetlands. 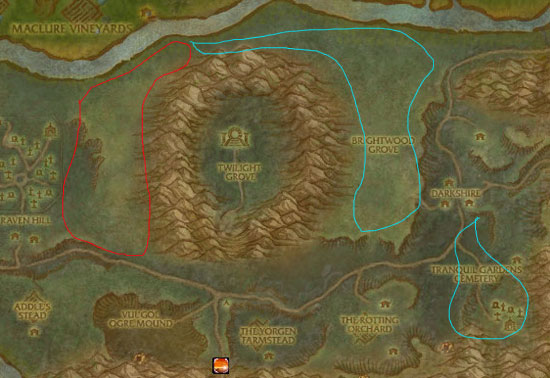 Wowhead shows 3 types of spiders that drop Spider's Silk in the areas marked above. I started at the road and worked my way through the whole area marked in red on the map. These were Black Widow spiders & there were a lot in a small area. Once I reached the riverbank, I followed along to the East & through the Brightwood Grove area, marked in blue on the map. These were the Venom Web Spiders & were much more widely spread out. Next stop was the Tranquil Gardens Cemetary, also marked in blue. These were the Black Widow Hatchlings & I don't know if I just missed them in the hilly terrain but I really didn't find many at all.

So I headed back to the red area & concentrated on the Black Widows. Over about 45 minutes, I killed approximately 150 spiders & only picked up 5 Spider's Silk. I also picked up 4 pieces of green quality armour. Nev's opinion - hmm, not too bad an area. 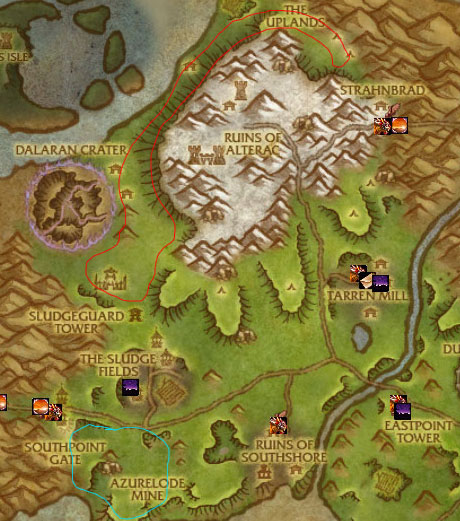 So my next target area was Hillsbrad Foothills with spiders in level range of 19-22. Wowhead shows 3 or 4 different types of spider here including Forest Creeper, Domesticated Creeper & Domesticated Mine Creeper. Unfortunately the domesticated types are friendly to Horde players so only the Forest Creepers are available for farming. The red area above shows where I found most of the Forest Creepers. The blue area is where the other types are but if you are farming 'at level' on an Alliance character, be aware that there are unfriendly NPC's all around the mine area.

I found a fair few Forest Creepers in the red area, some spread out & some bunched. After 30 minutes & only 60-70 kills, I had 2 Spider's Silk & 3 pieces of green quality armor so I gave up! Nev's opinion - don't bother farming here! 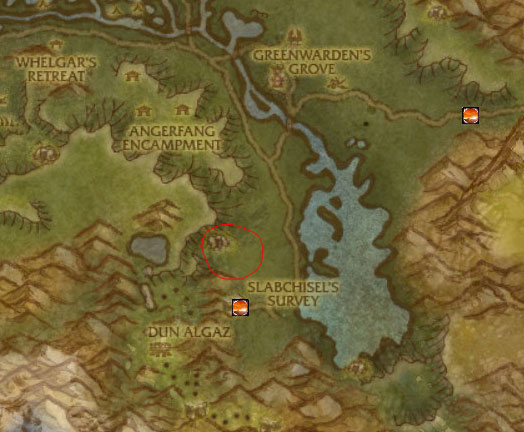 This has long been a favourite spot of mine for farming Spider's Silk & I'm happy to report, it didn't let me down this time either! There are 2 types of spiders in & around this little cave. Leech Stalkers outside, quite a few in a smallish area & Cave Stalkers inside as well as a chance at a rare spawn Leech Widow. For miners, this cave also has tin deposits which is a nice little side benefit. The Leech Stalkers outside spawn fairly quickly too which is always nice.

The other side benefit of Wetlands is the Razermaw Hatchling pet you can pick up quite easily in the cave on Raptor Ridge. You can see the cave entrance on the map in the top right hand corner. Not the best selling of the dino hatchlings because it's pretty easy to get but still a quick bit of gold if you're here anyway.

So there we go - Wetlands wins hands down for me. Do you have any other spots you farm Spider's Silk?

I'm thinking of doing a series of these farming spots - what other hard to find items would you like to see a post on? Not pets tho, there are already loads of guides for those. Let me know in the comments or you can email me at the address top right of the side toolbar :)
Posted by Nev at 15:59