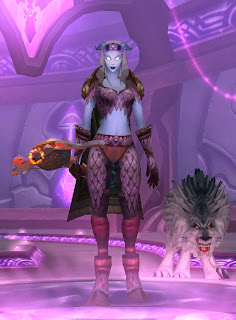 My 2011 started off full of enthusiasm & found me writing regularly here as I rode the excitement of the early stages of Cataclysm. Levelling 4 alts to 85, levelling JC & Enchanting so I could make even more gold, discovering Trade Skill master & making new friends was so much fun & kept me going until mid-summer.

Once I hit gold cap though, I kinda lost my drive & if you've been a regular reader, you'll know my posts have been very scarce here since. I hadn't been doing the new Cata dungeons & hadn't even seen inside the Zandalari ones when they were released so I did a few with guildies & got sidetracked into PvP with my newly dinged Hunter. Had some personal problems with a couple of guildies & combined with the lack of drive/focus with my gold making, I spiralled down quickly & have been fighting clinical depression for a few months now.

The gold making community has been a constant source of friendly support though & I'm so proud to call them all friends. Just little messages of 'I'm here if you need me', 'I miss your writing, Nev' or even just 'hugs' means so much when one is so low. One special person gave me the impetus to start fighting again & to get some help so now I'm booked in for various sessions in the coming months to try to sort all this crap out.

I could waffle on forever about my plans for the New Year but right now, it's all the small stuff - baby steps & 'just keep swimming' as Dory would say :P I plan to return here more regularly but I won't promise, I just don't know yet. There's light at the end of the tunnel - I just have to get there.

So I guess what I'm trying to say is 'a huge Thank You' to all my readers, my fellow writers & my goldmaking friends - without you guys & gals, I'd still be broke in game & broken in RL. I was going to name everyone who's been so nice to me but the list got so long, it would need its' own post!